The story of one chronically-anxious woman’s attempt to become braver, one insanely awkward adventure at a time.

For most of her life (and even during her years as the host of a popular radio show), Courtenay Hameister lived in a state of near-constant dread and anxiety. She fretted about everything. Her age. Her size. Her romantic prospects. How likely it was that she would get hit by a bus on the way home.

Until a couple years ago, when, in her mid-forties, she decided to fight back against her debilitating anxieties by spending a year doing little things that scared her–things that the average person might consider doing for a half second before deciding: “nope.”

Refreshing, relatable, and pee-your-pants funny, Okay Fine Whatever is Courtenay’s hold-nothing-back account of her adventures on the front lines of Mere Human Woman vs. Fear, reminding us that even the tiniest amount of bravery is still bravery, and that no matter who you are, it’s possible to fight complacency and become bold, or at least bold-ish, a little at a time. 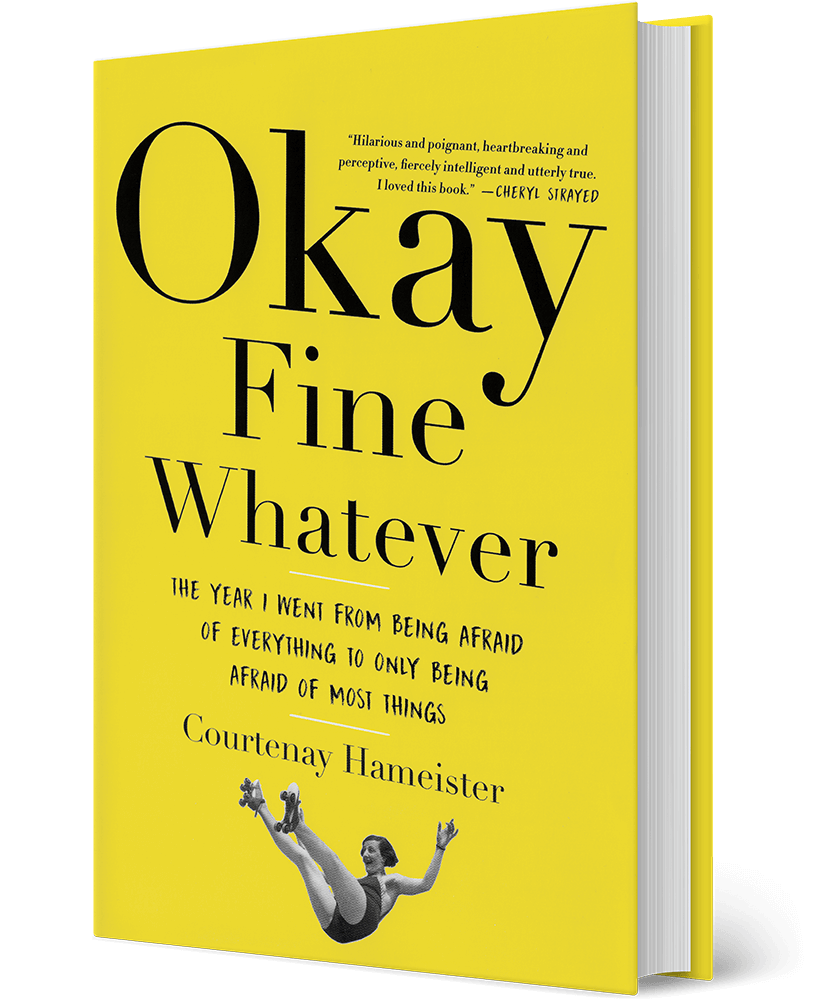 “It’s a rare writer who is as frank, funny, and smart as Courtenay Hameister is on the page, and in Okay Fine Whatever her talent for all of these things is on full display. I was moved by Hameister’s vulnerability as she wrote about her long-time struggles with her weight, her anxiety, and her search for love, and I was gobsmacked by the fearlessness with which she set out to do the varied, wild, strange things she thought would cure her of her deepest sorrows. I never wanted to put down Okay Fine Whatever. It’s one of those books that takes you into its grips. It reads like an adventure novel and a secret whispered into your ear. It felt true to me and alive and real, like on every page I was witnessing someone who finally made good on an ancient dare. I loved this book. I think you will too.”

“A witty, wise call-to-arms for the anxiety-ridden in a period when we’re more anxious than ever. A timely book for these end-of-times times.”

“The author not only chronicles how she faced her inner demons and won; she also offers a reminder that doing even the smallest thing to conquer fear ‘is enough to change a lot.’ A fresh, intelligent memoir.”

“Inspiring from the first pages. Courtenay fearlessly lets us into her head; she didn’t clean up in there before company came over, and I am so glad. Her risk-taking adventures in career and love are more stirring to me than any daring physical feat. You’ll root for Courtenay while reading and in your spare time too.”

“Courtenay deftly executes one of the most difficult feats for a writer: she makes the smallest moments vivid, meaningful, and laugh-out-loud funny. You’ll be rooting for her the whole way, and she’ll surprise you at every turn with her fortitude, her sparkling feats of fearlessness preserved in riotous detail, and her joie de anxiety.”

New York Times bestselling author of Wherever You Go, There They Are

“I loved this book so hard. Courtenay Hameister makes me feel thrilled to be alive-even though most things in life scare the crap out of me so much it’s hard for me to walk out of my own front door. Okay Fine Whatever is a brilliant testament to the fire of the spirit for misfits and scaredy pants everywhere. A soul triumph. A reason to live.”

Author of The Book of Joan

“Courtenay Hameister is one of the funniest, sharpest writers I know. Her work is confessional, witty, and laugh-out-loud hilarious. I love her.”

New York Times bestselling author of Heartsick and One Kick

“Vaguely embarrassed posers who think they know from humiliation, step aside – the somewhat intrepid yet thoroughly original and hilarious Courtenay Hameister is our new patron saint of the bizarre life experience. Readers everywhere will be super grateful to her for doing all this awkward stuff so they don’t have to. Thanks, Courtenay!”

Author of In Praise of Difficult Women

“Courtenay Hameister wrote the following sentence and for this sentence alone she should be world famous: ‘Like the snowflake of the genital world, no two vaginas are ever alike.’ Her stories are honest, funny and touching. I love her work and so will you.”